You are here: Home / True Sex Stories / I cheated on my wife with our small breasted babysitter

I was a married man with two children, I would be lying if I said my marriage was a happy one. We would fight constantly and sex was once a year if that. My wife and I were not compatible at all but we got married when she fell pregnant and we should never have stayed together, I admit I should never have asked her to marry me and we thought we were doing the right thing for the kids but we weren’t.

So, let’s get started, shall we?

How I Fu*ked My Babysitter?

We were at a point in our marriage where even spending 10 minutes too long together was a nightmare but we decided we would try and put up with one another by going out for a meal, just the two of us.

Our usual babysitter let us down the day before and when I was telling my friend he gave me the number for his babysitter, saying she was a friends daughter but great with kids and very trustworthy.

I gave her a ring after I had finished work and she assured me she would be there, she seemed really friendly on the phone and it actually made our date seem less bleak knowing the babysitter was nice.

She turned up about 10 minutes early and when I opened the door to her, my eyes almost fell out of my head. She was outstandingly beautiful with short brown hair and green eyes, she was petite and wore denim shorts with a white tank top. She had a backpack with her, she was in college and assured me she would be studying whilst the kids slept.

I couldn’t get over her, she was beautiful and everything inside of me twitched when I looked at her.

We went out for our meal and it was awful, we got into an argument and left early. When we got home my wife stormed upstairs, changed her clothes and headed upstairs not even looking at me. The babysitter sat on our couch, with her head in her books, politely pretending she couldn’t hear the commotion.

I sat down opposite her and sighed, she asked me if I was OK. She looked genuinely concerned as she looked up at me and I nodded, my wife zoomed off in her car with the kids and we were left alone in my living room.

I poured myself some scotch from my liquor cabinet and I told her she could go and thanked her for looking after the kids but she didn’t go anywhere, she put her books down and moved closer to me, sitting down next to me and rubbing my back, it was the kind of comfort I needed and I smiled at her.

She smelt so sweet, her hair was freshly washed and smelt of vanilla and some sort of berry. She kept on rubbing my back and then moved closed to my ear, whispering the most incredible sentence I have been whispered:

I couldn’t believe what she had just said, I was taken aback. I looked at her puzzled, expecting it to be some sort of a trick. She just smiled at me, a lustful look in her green eyes. I noticed then that she wasn’t wearing a bra, she didn’t need one, she had incredible small tits that looked so cute through her white tank top. Her nipples were now erect and poking through her shirt and that’s when I grabbed her head and kissed her.

Electric bolts were flying through me, I felt so alive. My c*ck was rock hard and I felt nothing but passion for this babysitter, she sat on my lap and we made out like we were both desperate for it. She pulled her white tank top up and over her head, leaving her sitting on my lap in just her jean shorts. Her tits were so small but so perfect, her red nipples were perfect and were begging to be pinched.

We sat making out on the couch for some time before she moved her hands down to my suit trousers and began unbuttoning them. I did have a flash of guilt for my wife but I knew it was over between us and I wanted this so badly. This babysitter wanted me and I wanted her and I knew I would forever regret it if I told her to stop now.

She Pulled My C*ck Out…

I then pushed my hand into the back of her jean shorts, feeling her ass. I had unbuttoned the front button so that they were loose around her waist and gave me room to feel her. Once I had felt her petite ass I moved my hand round to her pu**y and felt the small mound of hair she had left. We made out and touched each other so intently and passionately.

I felt her small breasts and she pushed up against me, we were both so lost in the moment.

That’s when she pulled off her jean shorts and slowly sat back down on top of me, she was really petite but she knew exactly how to use her body. She teased my co*k with her pu**y going to push herself on me and then pulling herself off, when she finally did let my dick inside of her, I groaned at how tight she was and told her to go slow. She slowly inserted me in and out of her as I grabbed at her small tits and we made out.

She smiled up at me when I was done, pulling her white tank top back up over her head and sliding on her jean shorts. She kissed me on my cheek and told me to keep my chin up and she just left.

I fell asleep and when I woke up on the couch, the sun setting I did think it could have been a dream if I hadn’t seen her little white panties on the floor. I smiled and laughed out loud.

She keeps sending me these pictures…

I’m not sure what I should do. 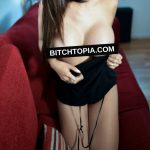 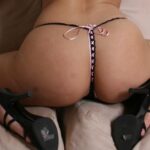 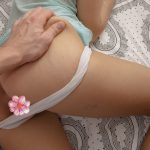